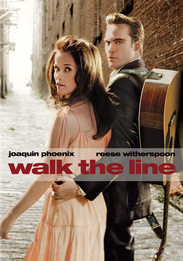 Before Johnny Cash was the Man in Black, he was just another musician struggling to make something of himself. 'Walk the Line' chronicles the extraordinary rise to fame of a musical legend.

Overcoming early hardships such as the accidental death of his brother, Cash (Joaquin Phoenix) stormed Nashville with his innovative blend of rock, folk, blues, gospel and country. But even as his creativity blossomed, his heavy drug use took a toll, leading to a period of destructive behavior and the failure of his first marriage.

It was June Carter (Reese Witherspoon), daughter of the first family of country music, who lifted Cash out of his emotional chaos and helped him to become the man and the musician he was meant to be.

Rated PG-13 for some language, thematic material and depiction of drug dependency.