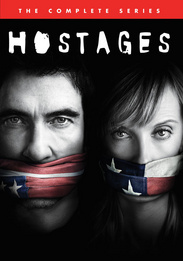 Hostages is a thrilling and suspenseful new drama series about a family caught in the middle of a political conspiracy that will change their lives forever. EmmyÂ® and Golden Globe winner Toni Collette (The United States of Tara) stars as Ellen Sanders, a top surgeon in Washington, D.C., who has been tapped to operate on the President of the United States â¦ and then kill him. If she doesnât comply, her husband (Tate Donovan â Argo) and kids, who are being held hostage, will be harmed. Ellen will do anything to protect her family, as will Duncan Carlisle (Golden Globe winner and EmmyÂ® nominee Dylan McDermott â American Horror Story, The Practice), a righteous FBI agent whoâs at the center of a conspiracy involving the President and will fight for his cause at any cost. As tensions mount, it becomes clear that the outwardly idyllic Sanders clan isnât as perfect as once thought, nor are their captors as evil as one might suspect.