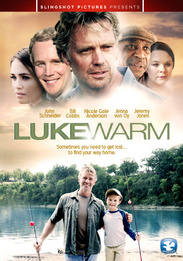 Luke Rogers (Jeremy Jones, Decision) started out on the right path, but when his dad (John Schneider, What Would Jesus Do?) walked out when Luke was just a boy, his world came crashing down. Now working as a bartender to make ends meet, Luke is slowly losing his way. Between the enticements of the nightclub scene and a reluctance to fully commit to his devoted girlfriend (Nicole Gale Anderson, Jonas), Luke's crisis of faith is coming to a head. Will he ultimately succumb to temptation or can he take control of his life and try to forge a new bond with his estranged father? Featuring a great cast including Jason Burkey (October Baby), Jenna von OÃ¿ (Blossom) and Bill Cobbs (The Ultimate Gift), and a universal message of hope, LUKEWARM is an inspiring tale of faith, forgiveness and redemption.